Compacting is critical to a retaining wall’s long-term performance.

Compaction uses mechanical force to make soil more dense and remove any looseness in the soil, so it will not settle over time or under additional load. Compaction also enhances soil strength.

You must compact each of the following:

Loose soil that is not compacted properly will add pressure on walls, collect water, cause settlement and will not anchor geogrid properly.

Place and spread out soil in layers (lifts). Thoroughly compact soil before the next lift is placed. The number of passes needed and maximum thickness of the loose-soil lifts depends on the soil type and compaction equipment used. Even with the heaviest compaction equipment, loose lifts usually should not exceed 8 inches thick.

When placing large amounts of fill, such as for commercial walls, soil tests must be done to ensure proper compaction is achieved. First, a laboratory test called the Proctor test is done on the soil using a standard amount of loading. This determines the soil’s maximum density at optimum moisture. Then a series of density tests are done in the field as the soil is compacted. Usually, soil fill must be compacted to at least 95 percent of maximum standard Proctor.

The type of compaction equipment used depends on the type and amount of soil being placed and the location. For small amounts of fill, compacting with a hand tamper on thin lifts (2 inches) can be sufficient. Plate compactors often are used for low landscape walls or directly behind the face of tall walls. For larger amounts of fill, large walk-behind or riding equipment usually is needed.

For fine-grained soils like clay, kneading-type equipment such as rollers with pad-feet usually are used. For sand and gravel, vibratory plates or vibratory rollers are used. For complete information, consult the compaction equipment supplier or manufacturer.

Do not use heavy, self-propelled compaction equipment within 3 feet of the back of the wall face because it could push the units out of alignment. Also, “jumping jack”-type tampers generally should not be used behind walls either. 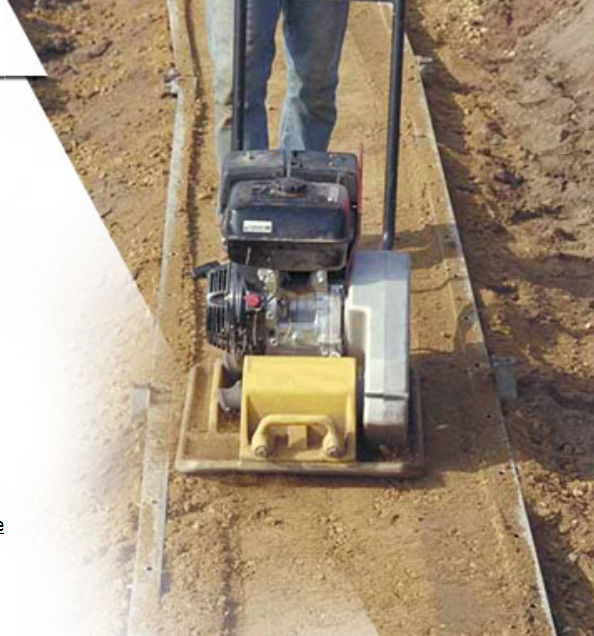